Weather data proved to be an indispensable key to breaking the much vaunted Germans Enigma cipher. Before the war the Poles, sensing that peace would soon come to a violent end, provided the British and French with Enigma machines.  But what were its codes? In March 1941, the German trawler Krebs was fired upon and set ablaze by one of Britain’s new large fast destroyers, the Somali, during a raid to destroy cod oil processing plants—the source of vitamin A which is vital for the maintenance of good vision for pilots and sailors—on the Lofoten Islands in the Arctic. Upon boarding the smoldering hulk, sailors swept up papers that might yield secrets, and in the captain’s cabin, came upon a locked drawer. Suspecting that the drawer would not be locked if it did not contain something of high importance, the Somali’s signals officer raised his pistol, turned his head to protect his eyes, and fired a shot at the drawer’s lock.  (He learned this procedure, apparently, by watching movies.) The drawer held a black box. In the box were two round disks with letters on their rims, what appeared to be electrical connections, and indentations that suggested they might rotate on a shaft. Although he knew nothing of Enigma, he suspected the disks might be part of a cipher machine and took the box along with him. 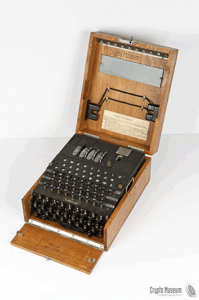 National Museum of the Royal Navy

He was right. The wheels, known to cryptologists as “rotors,” were used to prepare Wetterkurzschlüssel, the short German weather cipher. The cipher reduced weather observations —wind speed and direction, temperature, humidity, barometric pressure, cloud cover, and precipitation and their locations into single letters, compressing transmission time from minutes to seconds. The daily ciphers were listed in twenty-one-page code books printed on pink paper in ink that would vanish if the page got wet.

Knowing of the plunder from the Krebs, a young analyst at Bletchley Park, Henry Hinsley, wondered to himself whether German weather observations from sea were broadcast in Enigma code. He convinced his superiors that this must be true, and they urged the Royal Navy to capture another German weather vessel.

The München set out on May 1, 1941, from Trondheim to circle within the fifty-four-square-mile sector for a month sending weather observations twice a day. The sailing of this mission was not as secret as the Kriegsmarine thought. The Royal Navy dispatched a flotilla of three cruisers and four destroyers including the Somali from the Home Fleet basin at Scapa Flow on May 5. Two days later, the cruiser Edinburgh and then the Somali sighted smoke from the München which put about to flee. It was never much of a race. Turning 32 knots, the Somali soon came within range, and its shells straddled the trawler. Fearing for their lives, its crew abandoned ship but not before a petty office had sealed the Enigma machine and its rotors in a lead-weighted canvas bag and heaved it over the side, but the Enigma codes for June were seized.

With the code books and the Enigma and with the installation of more first-generation computers (called bombes at Bletchley), Hinsley and his fellow colleagues accelerated their decryption of German naval radio traffic.  As a result the U-boat menace in the North Atlantic began to fade and supplies for D-day began to pour into England.